It was very nice that I got to run 2 miles on Saturday, and in all honesty it felt pretty good.  My rear of course had the tight areas but it felt pretty good and it felt “natural” again to be running, which I haven’t felt as of yet.  I also got to watch my husband PR in the 5K!  Its amazing how quickly the race goes by when you’re not running.  I watched the start of the race, walked back to the building and went to the bathroom quick and by the time I walked back over the start/finish the first runners were already coming in!  Granted, they ran in the 14’s but still…it seemed so fast.  Tim came in at 17:35 and I watched the first woman come in about 30 seconds before that.  I couldn’t help but wonder if I would have been right there had I been in top shape.  Oh well, guess I’ll never know and I have to be ok with that. 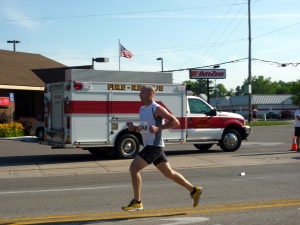 Other than that, Tim and I had a great weekend.  We had a nice evening in on Friday, followed by a nice evening out with friends and family on Saturday and then a quiet evening in again on Sunday night.  It was hot out, so we worked in the yard a little bit but I had to go inside after a while because the heat was just too much.

Also, I had some weird pain in my knee that started on Saturday after my attempted bike ride.  It was more of a strange rubbing feeling than pain but when I did my long bike ride on Sunday it definitely was a little of both.  I completed my 22 miles and then iced it and I’m staying off the bike for a couple days hoping it will go down.

So, that’s where things are.  I’m trying to be really positive.  The truth of it is…I’m kind of in a frustrated place again.  I know, I shouldn’t be.  I’m able to continue running, albeit a small amount, but its still progress!  I should be through the roof, but I’m sort of like…well, my running is just a slow buildup and more frustrating than I had planned on.  I guess that’s life though right?