It has been a while!

When I left off I was really struggling with the running and worried about getting through the half marathon I signed up to do with my friend.  I am happy to report that all that worrying was for naught.  We had really great race weather (chilly at the start) and surprisingly, I didn’t feel too bad.  I was surprised at the start with how congested it was with runners.  The marathon tried to have people seeded by time, but it was still chaos.  I’m used to racing in the front of races where most of the people at the start are supposed to be there and go out at the pace they line up at, and those that don’t just sort of fall into the back.  I wasn’t used to having so many people with such different paces all running together for the first few miles of the half marathon!  We started just behind the 7:49 pace group and I swear there were people running 9:30 pace.  It was extremely hard to pace when you were trying to run with your friends and get around the slower folks.  On top of that, there were parked cars on both sides of the street and then there was a section of construction barrels and cones to watch out for!  It really felt like an obstacle course, but my friends laughed and said that this was how it normally is at the start of a big race in the middle of the pack.  Another “mistake” that I felt the race made was to take the marathon/half marathon on the 5K run route which had water stops at mile 1 and mile 2.  Well, if you have the water stops, sure enough, people are going to stop.  Honestly, for a marathon or half, there is no reason to have a water stop before the 5K mark, ever!  But, I’ll digress, this wasn’t MY race, afterall, it was my friend’s.

My friend Darla stayed with us through those first few crazy miles and then dropped off.  The crowd started to spread out and Carol and I were keeping our pace between 7:55-8:05, perfectly on pace.  She was already breathing pretty hard though so I didn’t try to make too much conversation and tried to keep the pace from picking up too much in the beginning.  My belly felt ok.  It wasn’t great, but it wasn’t the worst either.  Maybe the race atmosphere served as a distraction, either way, the miles seemed to clip along at a good pace until about mile 10.  This is where Carol started to struggle.  We had banked a little bit of time in the beginning but were losing it quickly.  I could tell she was really struggling.  I just kept offering words to try to encourage her and tried to pick up the pace, but she would fall back.  I started to worry that she wasn’t going to hit her goal and that I had let us get out too fast, etc.  My calves started to really hurt.  Despite not feeling good, she was being really tough and sticking it out.  She wasn’t picking up the pace, but she wasn’t slowing down either.  I just kept telling her how much we had left and reminding her to do this for herself.  In the last mile, I really started to get worried.  That’s when she really impressed me because she picked it up again!  Believe me, I know how hard that is at that point in a race once you’ve already slowed down.  She fought hard, and I was so proud to be right there with her when she crossed the finish line to a new PR of 1:45.07!!!  She thanked me for helping her, but honestly it was such an honor for me to see such dedication and sheer will.  It reminded me of those feelings of pushing yourself so hard, when everything in your body wants you to quit and then realizing the wonderful results. 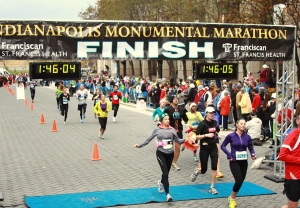 Me and Carol crossing the finish line of the Monumental Half

After that I took Sunday and Monday off of running to let my sore calves heal.  I had a work class all last week in Miami, Florida.  I packed my shorts and short sleeve t-shirts.  I went for a run at 6 am on Monday morning and couldn’t believe how great I felt!  I ran just over 6 miles because I got a little turned around and there were some moments when I had abdominal pain, but it seemed to be something I could try to correct by breathing a little more steady.  The next morning, another co-worker of mine arrived and we ran together the rest of the week.  Her pace was slower than mine by about a minute per mile, but I just went her pace and enjoyed the company and again was surprised at how great I felt.  There were some moments it seemed like I was floating again and could easily forget that I was pregnant.  I was thrilled!  I thought that maybe my belly had moved outward more and took some of the pressure out of my pelvic girdle and maybe it would feel this good from here on out!

I flew back home on Friday, and noticed on the long plane ride that my lower back was getting pretty sore.  I attributed it to the long day of travel and got to bed shortly after I got home around 1 am.  I woke up the next morning with some back pain, but it didn’t feel much different than it did the day before and since I’d had such great runs in Florida I decided to try a 10 mile run.  Tim convinced me to try a shorter loop and add on if I felt good.  That’s what I did, but within the first 5 miles I was feeling so amazing that I just decided to keep going and add on.  I felt like I did pre-pregnancy or at least in the early weeks of pregnancy running.  I was even cruising!  Ticking off 7:30 miles easily.  I started to day dream about races I’d do after the pregnancy.  Then, sometime around mile 7 things changed.  It wasn’t a sudden change but I noticed that my calves were starting to fatigue, I had a few hills and they seemed to take it out of me a little more than they should have.  Nothing really felt “bad” but I guess I just felt like the run was getting too long and I wanted it to be done.  I finished my 10 and decided that was probably the last 10 I do during the rest of the pregnancy.  It makes me sad in a way because I always love those great long runs, but I realized that I’m taxing my body more than I would if I were my normal pre-pregnancy weight.  Later on in the day, my calves and back continued to hurt, but I didn’t think much of it.

Sunday morning I woke up and my back was still pretty stiff so I decided to go buy one of those pregnancy pillows.  Well, I slept with it last night and woke up at 3 am with horrible pain in my back.  I could hardly move and it was just excruciating.  I’d try to lay in the most comfortable position and my head would hurt and I finally got up and started doing some stretches/pelvic tilts but they didn’t help.  I could hardly move/walk this morning.  So now I’m not sure what to do.  I have an appointment with the chiropractor tomorrow after work, but I really can’t imagine spending another night like last night.  I think I’m going to see if I can go in today.  I’m not sure about running.  On the one hand, it felt fine when I ran on Saturday so I wonder if it would be that bad.  On the other hand, since its hard for me to walk, twist, lift my legs, my common sense is telling me that’s a BAD idea!  So that’s what’s going on.

Little Alexandra (yes, we’ve finally named her!) has been moving a lot and growing!  My belly is very obviously pregnant now as I hit the 6 month mark today!  I’m really happy since they say at 24 weeks, even if you go into pre-term labor the baby stands a good chance of survival outside of the womb with intensive medical care.  Obviously, I wouldn’t want to deliver any time soon, but it is nice knowing that she stands a better chance of survival now than ever before.  So, according to my due date I have 16 weeks to go.  It could be 13 or it could be 18, and I’m trying to think on the shorter side.  I always thought I would be one of those women that loves pregnancy, and in the beginning I really did.  After all the running discomforts and now the back pain, I’m definitely looking forward to actually having my daughter to meet and hold and also getting my body back.  I know it will all be more than worth it, but in the short term it still isn’t very much fun!  I’m an active person and while taking a few days off of working out here or there isn’t so bad over the whole pregnancy, if I had to take a long time off it would be really hard on me.

I’m hoping that this is temporary and the chiropractor can provide some relief and then even if I have to take a couple days rest, that wouldn’t be so bad.  And then maybe I could have a normal, relatively easy rest of the pregnancy??